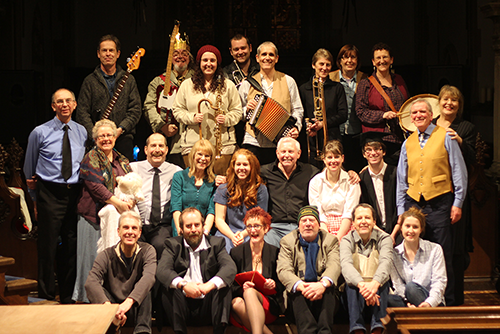 Turvey Mysteries came together in 2005 as a community theatre project to perform Tony Harrison’s acclaimed cycle of mystery plays. The first play in the cycle, "The Nativity", was performed to a packed house in All Saints’ Church in January 2006. The cast and crew were all local volunteers, many of whom had never acted before. This was followed in March 2007 by the second play, "The Passion", and in October 2008 by the final play, "Doomsday".

Such was the impact, both on those involved and on those who watched the plays, that even before the final performance people were asking whether we'd be starting the cycle again. After a break of a few years we did just that, and the performance of "The Nativity" in January 2014 marked the start of our second cycle, with"The Passion" being performed again in March 2015 and "Doomsday" in late October 2016.

The Music of The Mysteries 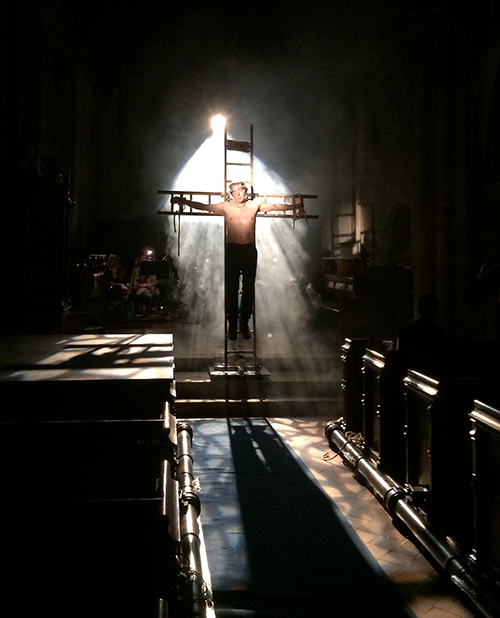 Working alongside Tony Harrison, John Tams, Graeme Taylor and their band “Home Service” produced a stunning backdrop to the plays, from sources ranging from Shaker hymns (the Tams/Albion Band anthem “Lay Me Low”) and dance tunes, to Bob Dylan. Rooted in the folk tradition, their music weaves a thread through the narrative, a perfect match for the story telling tradition which produced and preserved the Mystery Plays themselves. The line-up was classic Home Service / Albion Band, with electric guitar, melodeon, fiddle, drums, sax and the Home Service signature brass section.

There is no published score for The Mysteries. The band arrangements used in Turvey have been re-created by Tim Brewster in an exercise in musical archaeology, Time Team style, from published recordings and some lead sheets supplied by Graeme Taylor. The arrangements and band line-up are intended to be as close to the original as possible. Some additional music is also used in the productions, drawn from sources close to the rest of the material, and arranged in a similar style.

"Who’ll sing the anthem and who’ll tell the story?
Will the line hold? Will it scatter and run?
Shall we at last be united in glory?
Only remembered for what we have done."

"Only Remembered", words by Horatius Bonar & John Tams, sung at the end of Turvey Mysteries' 2008 production of "Doomsday"

For queries about Turvey Mysteries, send an email to: info@turveymysteries.org.uk